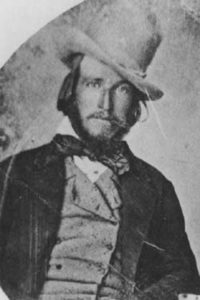 John Cuddy left Ireland during the potato famine of the 1840’s. So many Irish were coming during those years that they were not particularly welcome in America, but the men were welcome in military. John joined the “Dragoons” – soldiers who stationed out west to protect the “Frontier”. He was stationed at Fort Leavenworth in Kansas and traveled with his unit to California during the Mexican War.

As a sergeant, Cuddy “mustered out” of the Dragoons in 1853, after completing his five year term of enlistment. He then joined his unit as a civilian teamster when they were assigned to go to Fort Tejon in California.

Arriving in June of 1855, Cuddy was put in charge of the military livestock when he found a lush, mountain meadow for summer grazing some 20 miles west of the Fort. Here he built a log cabin shelter and made claim to the surrounding valley.

John Cuddy married Margaret Gale in 1858 and by 1861 had moved his wife and daughters into a larger log cabin home that still stands to the west of the present community of Lake of the Woods. They went on to homestead a good deal of the surrounding area and as the children became eligible, John had them homestead nearby as well until the Cuddy “empire” reached, almost completely, from Lockwood Valley to the present Interstate 5.

Mr. Cuddy was a farmer, rancher and moved his father-in-law’s lumber mill equipment from the Mil Potrero area to the bottom of Mt. Pinos to run that operation. He had several mining claims in the local mountains as well. 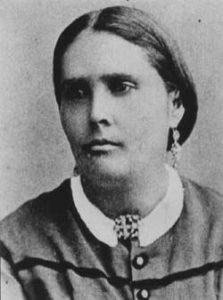 Margaret was the daughter of a famous explorer, trapper and trader, Joseph Gale. He had been in the San Emigdio Mountain area in the 1830’s but returned to Oregon to marry, Eliza, a Nez Perce Indian from the family of Chief Joseph.

The family moved to the area of Grapevine Canyon in the mid-1850’s. Joseph ran a lumber mill in the San Emidgio Canyon area and grew hay to sell to Fort Tejon. The family story goes that while guarding that hay, Margaret’s only brother was attacked and killed by someone who wanted the hay for himself.

In 1857 the family experienced the largest earthquake ever recorded in California, thought to be about an 8 on today’s Richter Scale. It was recorded that her father had to save one of the children from under a roof beam when it fell.

No doubt thorough activities at Fort Tejon, Margaret met and then married the handsome, John Fletcher Cuddy in December of 1858. As he was 35 and she only 15 her parents would not approve so they had to eloped to Los Angeles to be married. Margaret’s parents then moved to the future location of Bakersfield where they ran the ferry across the Kern River. The Gale family soon returned to Eliza’s homeland where Joseph became the territorial governor and fought for the rights of half-breed children

Margaret goes on to give birth to twelve children and was certainly a wonderful mother and teacher. Regrettably she died after the birth of the last baby in 1882.