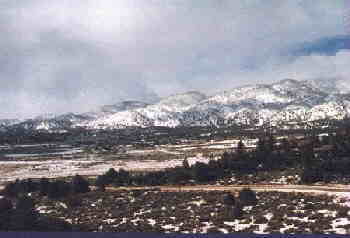 It has always been somewhat of a mystery as to how Lockwood Valley got it’s name but one substantial reference gives us the best clue to date. The 1860 census report lists a Bernard Lockwood of New York, age 48, as a miner in the Tejon District. He is listed with another fellow from New York by the name of Patrick Finnegan. Then in 1873 a mining report also mentions a miner by the name of Lockwood.

The Snedden family was the first family to settle in the immediate area of Lockwood Valley. Samuel Snedden left Pennsylvania at the age of 18 to seek his fortune in gold in California and for seven years mined from Canada to California. His gold fever was finally cured by the pretty Anna O’Keefe whom he met while working some gold mines in the Lockwood/Piru Creek areas. When Samuel made one of his trips to Gorman for supplies he met Anna who was there visiting her sister Johanna O’Keefe Gorman.

The Snedden’s first lived near Samuel’s mine in Kern Valley but possibly at Anna’s urging, moved to Lockwood Valley in 1879, following the death of her sister’s husband James Gorman.

It was Anna who purchased the cattle that brought about Samuel’s change from mining to ranching. Anna was also instrumental in founding the area’s first school for her children and those of John and Margaret Cuddy when Mrs. Cuddy died.

The school, located halfway between the Snedden and Cuddy ranches at the mouth of Kings Gulch was built by the men and boys of the two families. Young Henry Gorman also went to school there and no doubt stayed at, and helped out at, his aunt’s home.

There were several mining booms throughout the Lockwood area. One of the most notable was in 1886 when Colonel Alonzo Smith talked 40 to 50 miners into taking up claims on Lockwood Creek where he proceeded to found the community of Lexington. Within 2 or 3 years, when the mines the Colonel said were there didn’t prove out, the town of Lexington was deserted. Two other mining communities that developed were Griffin and Nordoff but very little information has yet been found of them.

The best known mining venture in Lockwood was found in borax. A gold prospector by the name of McClaren had sent soil samples from the northeast end of the valley in for testing. The result was no gold but instead a high grade of borax which had only a year before been found for the first time elsewhere in the United States. He and his partner staked out a claim in 1898. The mining operation was soon sold to larger operators and three mines eventually were built along the ridge – The Frazier Borax Mine, the Russell Mine and the Columbus Mine. The mines were reported to be the richest and most productive in the U.S. Eight to fourteen mule teams hauled the valuable mineral to Lebec where the teams were changed at a large barn there and then continued on to the railroads in Bakersfield or Mojave.

A sizable community developed at the base of the mines (at the north end of today’s Adams Trail) and was named Stauffer for one of the owners of the mine. The town included the mining operations, a calcining plant, stables, shops, post office and many homes and bunkhouses for the hundreds of men who worked there. The mines closed after only about ten years of operation when greater sources of the mineral were found in the more accessible areas of Death Valley and the Calico Mountains.

By the 20th. century a number of homesteaders had settled in Lockwood Valley. Many had come as a result of the mining activity and many in search of land a person could still gain through homesteading. Once the homestead was proved up some sold and the land developments began.

“Lockwood Park”, off Boy Scout Road and “Lebec Forest” in the area where the well known Owl’s Barn tavern used to be were two of the earliest developments which began in 1925. As a result of these subdivisions, we have established the founding of the community of Lockwood Valley as 1925.

The posters advertising Lockwood Park proclaimed it was the “Catskills of Southern California” with wooded slopes surrounding it for some of California’s greatest hunting, fresh flowing mountain streams full of trout and gold fields within a few miles. “Cabin sites” (lots) could be bought for $2 down and $2 a week for a total of $50.

The Lebec Forest subdivision was and still is located at the top of “School House Hill”, so called for the school that was once located at the eastern end of the grade. The advertising for Lebec Forest has not yet been located. “Owl’s Barn” was long a popular roadside stop at the top of School House Hill – one of the only places to get a cold or warm drink along the road when driving east from the Ojai area. The plant to the western end of the hill, long known to most as “Ridgelite” began by producing “rotary mud” for the oil fields in the late 1930’s and expanded to the many products it produces today.

Back to the 1860’s, a William Mutah settled south of Lockwood Valley in an area now known as Mutah Flats. Will Mutah or Mutah, was of French ancestry and had migrated to the area from Canada via the gold country, reportedly having fled further south to avoid a vigilante group. He became a teamster at Fort Tejon until he found raising cattle for the purpose of selling beef to the Fort provided more “flourishing circumstances”. He had gained a reputation of a renegade of “outstanding dimensions” and reportedly was a middleman harboring stolen horses being moved between the Santa Clara and San Joaquin Valleys.

Will Mutah died of a single bullet wound to the head inflicted by his 15 year old brother-in-law, Juan, who had grown tired of Mutah’s abuse of his sister, Bicente, who was Mullah’s wife. Immediately after the shooting, Juan rode to the Cuddy Ranch for help. Mr. Cuddy then rode to Fort Tejon where a doctor was summoned from Bakersfield by telegraph. Needless to say by the time the doctor arrived it was too late. Juan then rode fifty some miles to Ventura and turned himself in there though it is thought he was later acquitted of the crime.