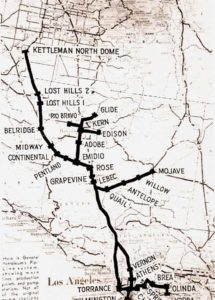 Following the days of Fort Tejon , one of the greatest influences on the growth of the Frazier Mountain area was the installation of oil and natural gas pipelines that were run through the mountain passes. The purpose of these lines was to carry those valuable products from the flourishing oil fields around Taft , California . Prior to the pipelines the oil and natural gas had to be transported by wagon or trucks to the railroad in Bakersfield , or along crude dirt mountain roads to the harbor in Los Angeles .

Work to improve these conditions was begun in 1912 and continued for the ten to twelve years that followed. Added to the construction work to lay the lines were the building of eleven transfer or pumping plants/stations with housing for the individuals and families of the workers at the sites, which added greatly to the activity and population along the route. 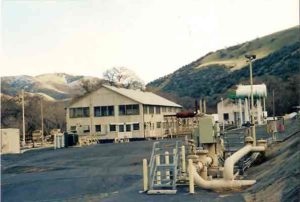 Midway Gas, later the Southern California Gas Company, was the first to put in a line and pumping plants. The first plant or station locally was at the base of Grapevine Canyon and on up the mountain a yard with warehouse, bunkhouse, office and homes was located just north of the present community of old Lebec. These buildings, updated in the 1930’s, are still located near the Lebec exit off I-5. The Gas Company put in a 12″ natural gas pipeline through the mountains from Kettleman Hills to Long Beach in 1912, a 20″ pipeline in 1929 and a 26″ line in 1931.

The Richfield Oil Company, first known as the Pan American Oil Company, began their oil pipeline at Lake Station near Taft, ran it on to Wheeler Ridge, on to Grapevine, up to Tejon or Lebec Station, and over the mountains to a station at Newhall, then down hill then to the Watson Refinery at Alameda & Willow in Los Angeles . At each of the stations it was necessary to heat the oil in the winter time to continue the flow. There were five employee houses at each station – three for families, one was a bunk house and one was a boarding house. All had wonderful porches that surrounded the homes for visiting and sleeping on hot summer nights. The Richfield Company also kept a beautiful picnic grounds at their station just north of Fort Tejon . These grounds were used by most all the major oil companies for their annual picnics until the highway was widened for Interstate 5. 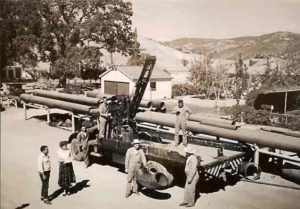 The General Petroleum company, now know as Mobil Oil, set up their stations from the Taft fields first to a station called Pendelton , then to the San Emigdio Station, Rose Station, the Grapevine Pumping Station and from there on up to the Lebec Plant which sent it on to the Quail Lake Station.

The purpose of these stations or pumping plants was to heat the oil with exhaust steam and send it on to its next destination by steam-operated pumps. In the early days of the line the oil was sent from Quail Lake through a line along what became the Ridge Route Road, a road first created by power line construction and oil company employees. By the late 1920’s most of the “ridge line” was discontinued and the oil was sent through a line down in the canyon to the west of there, though some oil lines are still in use along the old roadway. From the Quail Lake Station another line sent oil to the east to the Antelope Pumping Plant located in an open area north of the community of Fairmont . From there the oil was sent to the Willow Springs Pumping Station and then on to Mojave for use by the railroads and to be shipped by rail. This line was discontinued in 1949. The system was in operation twenty-four hours a day and seven days a week, and the eight inch pipeline delivered 24,000 barrels of fuel during a twenty-four hour period. The pipeline was referred to as “the bank line” because the oil that ran through it was like money in the bank.

These oil pumping stations were in full service for thirty-eight years but when trains began using diesel fuel the plants were dismantled and some of the pipeline removed by the 1950’s.